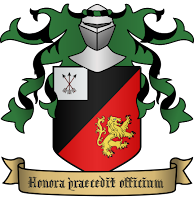 Commodore Breckingsbridge was responsible for extracting the remaining Confederation fleet from the Marfik Salient and delivering a major blow to the Imperial Fertod Navy in its attempt to capture the Confederation capitol on Saiph.  The Imperial Fertod Navy was so utterly crippled that not only were hostilities with the Confederation ended, it could no longer enforce the Emperor's will.  Within 5 years the Fertod Empire crumpled, breaking into numerous small polities.

A product of the Saiph Naval College, Commodore Breckingsbridge attained flag rank on his merits and experience unlike many of his superiors within the Confederation Navy, whom attained their flag through political connections.  Destined to never attain the rank of Admiral, the Commodore developed a cadre of like minded officers to operate his task force of fast cruisers.  When the Imperials threatened to finalize the destruction of the ineptly led Confederation fleet that had be exposed in the salient around Marfik, Commodore Breckingsbridge coordinated the rearguard action that allowed the remnants of the fleet to escape to Saiph for its final stand against the Empire.

The Confederation council promptly dismissed the remaining senior flag officers that held their positions on political connections and gave Breckingsbridge overall command.  With little time to prepare for the final Imperial assault, Breckingsbridge and his staff devised a strategy of using privateers and support vessels as decoys and bait in an attempt to require the Imperial fleet to spread its fleet around to handle the potential threats.  There were many heroes as Breckingsbridge's adhoc raiders were able to distract the Imperial fleet allowing the main Confederation fleet to defeat in detail the Imperials forces as they attempted to contain the Confederation to Saiph for the final assault.

After the final battle in the outer zone of the Saiph system and the subsequent collapse of the Fertod Empire, the Confederation, always a fractious collection of self-interested polities, started to splinter into its original form of separate but associated planets.  The remnants of the Confederation fleet flocked to Breckingsbridge and with the help of his command staff, they formed the dominant fleet in the region, the Knights of Saiph.

The first 100 years of Knights' reign have seen the fleet continue to grow and spread its influence.  With the breakup of the Fertod Empire and the Confederation, war is commonplace and it is big business.  Things were going better than planned and the Knights continued to improve their abilities.  When colonists from outside the region, the Knights assistance with the initial colony and protection from locals looking to take advantage of the fledgling colony led to a public relations dream, made even better when the colonists shared some of their newer technologies with the Knights.

The Knights have over the years shown their political adroitness by avoiding being embroiled in the intrigues that continually hamper the region.  Even when many government contracts were coming up empty, the Knights avoided potential losses to its coffers by remaining flexible and taking advantage of the many commercial contracts that became available.

In recent years the Knights have made a concerted effort to recruit professional soldiers in an effort to bolster the dynasty's defenses.  This has sapped some of the dynasty's available wealth, but the results with improved fleet capabilities and better security within its territory indicate the wealth was spent well.


Now that we have our initial derived statistics for our Dynasty, its time for us to make a few decisions for the improvement of our Dynasty. First we get to chose three Characteristics we wish to improve and roll 2d6 plus said Characteristic's DM against each chosen Characteristic's current value. If we roll higher than the current value, the value is increased by 1; if a natural 2 or 12 is rolled, the value decreases by 1 or increases by 1 respectively. As indicated below, the Knights of Saiph failed all three of its rolls, but did not lose any values.

Next we have the option to deduct one point from a trait and apply it to another trait.  You may do this equal to the Cleverness DM + 1.  The Knights choose just to increase its Territorial Defence at the expense of its Fleet value.

Aptitude training follows, allowing the player to attempt to train up to five skills.  However, you do not recieve any Characteristic DMs to assist in this training.  The die roll is modified by the current Aptitude (Skill value) with untrained skill providing a -2 DM.  As with the Characteristic practice, the Knights failed to improve any Aptitudes.

The final step before delving into the dynasty's early history is the calculation of its Values.  These values represent the available resources for task resolution.  If any of these values are reduced to 0 at the beginning of a generation phase, the dynasty  has collapsed.


The Knights of Saiph decided to take 5 rolls on the history/background table. The choice of 3, 4 or 5 rolls must be made prior to any dice are rolled.  I rolled the following:

Now that we have bought our initial Characteristics, we now move on to fleshing out the rest of its statistics.

The first column represents the Characteristics we purchased in the first step. The next column are the bonuses we received for having a power base of Starship/Flotilla.  Since the Dynasty qualifies for the Military Charter Archetype, the next column contains the starting (unmodified) values for the Military Charter.  The following column has the bonuses (both positive and negative) received due to boons, hinders and the first generation bonuses.  The final column represents the almost starting values for the Dynasty.

Two last steps remain:  initial generation training and the history of the first 100 years.  The first step allows the player to attempt to improve a few attributes through a combination of rolls and swapping.  The final step of dynasty creation has the player rolling 3, 4 or 5 times (player's choice) on a archetype specific history table which provides good and bad results that help flavor the dynasty.
Posted by aka John at 12/23/2011 12:45:00 PM No comments:

which was on sale (still on sale?) over at DriveThruRPG for $14.99. Not quite a re-write of Pocket Empires, and quite a bit abstract, which gathering from a few reviews has put off a number players. I like the concept and have been playing around with creating my own dynasty.

I going to document the creation of my first dynasty and in following entries, I'll document its progress over the generations.

My first Dynasty will be a Military Charter, a dynasty which I plan will become a dominate force within its region and maybe create the foundations for an empire. I decided to use the build method as opposed to the standard (random) method because the standard kept leading to initial values less than 0 which technically indicate that the dynasty has failed. So I started backwards in the creation process and chose some of my build values first in order to determine my available pool for initial Characteristics.