Due to a visit from the Mother-in-law, Halloween approaching, an all-day Battletech throwdown, and some upcoming medical appointments this week, including an overnight at the local hospital, I've been too busy to post.  Expect regular broadcasting to resume next week.
Posted by aka John at 10/13/2010 09:56:00 AM No comments:

New Project: Learning how to do electronic cartography

Despite early exposure to computers and using computers for both personal and business ends, I am not very savvy outside of spreadsheets and accounting/tax software.  Back during the hey-days of DOS 5.x through 6.x, I thought I was pretty knowledgeable about software, so much so that I had memorized the slash commands for Lotus123 and WordPerfect and had a hard time adjusting to Excel and Word.  With the arrival of Windows 3.x in the early 90s, I decided to go the accounting route and leave the computer route to those who liked to run cable through drop ceilings and constantly take courses to keep up with new computer technology (funny thing is about that decision, accounts are constantly training themselves).

So, since I've got back into gaming and I love maps and I love to draw maps (poorly I confess) I've been wanting to do my own maps on the computer.  I don't care for what either, Battletech, Traveller, Warhammer, generic D&D.  I just want to be able to do maps.  Guess what.  Its a pain in the ass.

I picked up Fractal Mapper 8 a number of months ago (why didn't I choose CC3, you don't want to know) and have taken/read a number of tutorials and have prowled the cartographer forums and I still haven't produced crap.  I feel totally lost when I look at graphic programs, whether its CC3, FM8, Inkscape, GIMP, what-have-you.


Well, I think I've finally have started to make some headway and I'm going to start posting examples of what I'm doing for both comment and pointers. 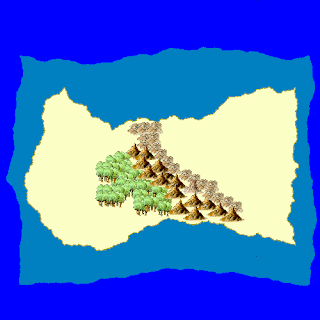 or, The Further Adventures of Adelbert Vaksmann, Part IV.

Well, not matter how much he would like too, Adel can't fault Oren, the party's dragonborn meatshield, for ruining our chance for surprise.  When we last left that shining example of graceful balance, Adel, the party had decided to rest in the room with the scrying mirror.  The party's intellectuals, you know the wizards and cleric types, conferred about the wisdom of leaving such a potentially dangerous tool (the scrying mirror) there and the dangers of destroying said tool.  After much debate, they had Adel trap the room and we were on our way into the tunnel we had found.

The tunnel was not a very well built affair, with ill-spaced timbers propping up the tunnel almost as an afterthought.  But that didn't matter much, since a short distance into the tunnel, the party found itself in a natural tunnel.  Dim light and voices could be heard in the distance.

Shortly, the party came to a fork in the tunnel.  With Ky checking the tunnel to our right, Adel snuck down the tunnel to the left.  Now the last few encounters, the jingling dragonborn has been the downfall to our ability to surprise opponents.  This time it was all Adel's fault, tripping over his own feet (well, it was a natural cavern, don'tchaknow) and falling upon his backside with a loud thunk.

From inside the cavern, a nasty orc barbarian glanced up and saw Adel there.  Adel jumped up, grinned and backed back down the tunnel in a hurry, all the way back to the fork in the tunnel.  As the orc comes charging up the tunnel, party members step forward to engage.

Hearing commotion down the other tunnel, Adel decides to assist Ky, the female elf, as she is the only member down the tunnel.  However, as Adel comes to assist Ky against the hobgoblin, he finds that the nasty little guy isn't interested in fighting, just making googly eyes at Ky.  Being the evil little enchantress she is, she then proceeds to roll a crit and rip the hobgoblin's still beating heart from his chest and laughing stomp on it with her boot.  Well, not really, but a critical was rolled and the poor nasty was felled by the one he thought he loved.

The fighting progressed onward, with the Hand of Bane joining in the battle in the far tunnel.  Much cursing and banter took place between those party members facing the Hand and the Hand.  It seems that, prior to Adel joining the party, the party had faced the Hand of Bane before and the Hand had embarrassed the dragonborn and had taken the party's lunch-money, so to speak.  And unfortunately, the Hand was still giving poor Oren a hard time.

While one half of the party was dealing with the Hand, the other half was confronting an Orc chieftain of some sort.  Unfortunately, the space was confined and it was becoming very difficult to maneuver.  The chieftain was having difficulty landing a good blow due to Adel getting in his face and blinding him with his rapier, but every time we thought we had started to beat him down and he got bloodied, he'd heal back up.

However, the battle does continue on.  We had to pause about a 1/2 hour earlier due to the DM's recurring problem with his router resetting his IP address.  Or at least, that is what I think the issue is, I'm not really up to speed on connectivity issues.
Posted by aka John at 10/05/2010 03:45:00 PM No comments: