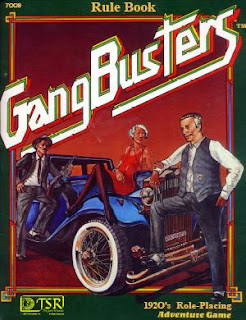 I was perusing my copy of Gangbusters and came across this little gem (page 20):

A first level policeman is a rookie, and will spend
most of his time dealing with other PCs and NPCs who also are
first level. A fifth level policeman deserves much more respect,
will handle tougher cases and will be able to associate more
easily with social and political leaders. Law enforcement officers
who reach 10th level or higher are living legends, and the
mere mention of their name will strike terror into lower-level
criminals.

I've played with too many players that with 1st level characters, they'll already living legends in thier mind.  I'll have to remember to keep knocking them down until they really are at that level.

Well, I'm about two weeks behind on the adventures of Adelbert the Rogue.  Its coming, soon.  My Battletech/Stargrunt game for tomorrow is cancelled; half of the crew had something come up, so I'll probably just be tinkering around with my Traveller Sandbox or the homework I have to do for my Starcluster3 Beta session on Thursday.  Its either that or go catch up on yardwork that has been neglected for the last couple of weeks (thank you real life, i.e. job).

FYI - This is a gaming blog

Perusing the various sites and blogs out there, I am surprised of the number of fellow bloggers that mix real world politics with their gaming discussions.  While I can be quite passionate about my politics, I am of the firm belief that politics doesn't mix well with anything and I refuse to discuss politics with fellow gamers to the best of my ability.

Now that I've got some free time with work finally slacking off, I've got a pretty full plate of gaming coming up:

And considering that the little one decided she would rather play field hockey than soccer this fall, I'm not going to coach, I should be able to keep my gaming schedule pretty open until lacrosse season next spring.

Well, adventure Adelbert did this past Sunday night.  However, due to the player hitting the adult beverage heavily to take his mind off his upcoming annual audit at work, the player doesn't really have anything coherent to say.  Additionally, being the self-centered type anyway, Adelbert would really only want to discuss himself with little mention of the others in the party, except where it made himself look good.

Having dispatched the young, blue dragon during the previous session, Adelbert led his merry band further into the cavern system intent on finding the leaders of the cult we were hunting down.  Don't ask me why, Adelbert just joined this party and I'm too lazy to read all of the background.  Besides Adelbert doesn't care, he is just looking to get paid without having a real job.  So after mop up operations on the remaining hobgoblin forces, Adel and company headed back to Winterhaven, our base of operations for some R&R and restocking before heading to the haunted keep to track down the cult leader.

So that is where we pretty much left it when we wrapped the session, Adel regaling the local bar wench with his exploits against the dragon, looking for a free pint and a warm lass to share his bed.

Tonight's session found the intrepid party still locked in combat with the young Blue Dragon with the dragon's handlers about to join in the fray.  Adelbert the Rogue found himself a little too close to the dragon and his hoard was suffering from both dragon's lightning breath attack and the scarab beetles guarding his coinage.

Adel started to disengage himself from the fight when someone landed the killing blow.  The Hobgoblin captain and his bugbear troops were rushing to the scene as the dragon fell.  As he was running the captain was barking instructions (a pretty cool app for Fantasy Grounds II has characters only being able to read the languages listed on their sheets, and since Adel only speaks Common and Dragon, he had no clue what the hobgoblin was saying), and being the flamboyant, wise ass that he is, Adel starts to shout in a bunch of gobbleydeegook, imitating the hobgoblin.  Bad mistake.

The next thing Adel notices is the spear shaft protruding from his stomach with a pissed hobgoblin on the other end.  Adel drops and it looks like curtains for the rogue.  But today the Lady brought Adel weal, not woe and faster than you can say, 'Hello. My name is Inigo Montoya. You killed my father. Prepare to die', Adel with a little healing help (and DM dice roll fudging, wink, wink) jumps back up with 1 hp left and sneak attacks the flank hobgoblin captian and scores a crit.

Shortly, the battles over and the good guys (that's us) start looking the the dead bodies for goodies, took an extended rest and headed further into the natural cavern complex looking for the leaders of the cult.
Posted by aka John at 8/01/2010 10:52:00 PM No comments: