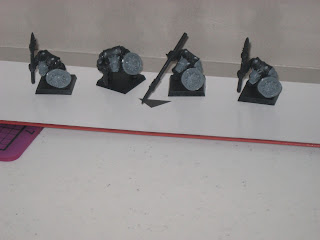 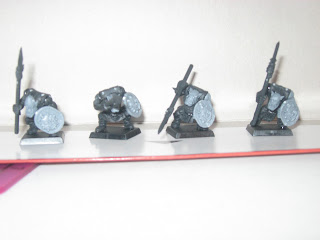 Here are some Orc Boyz spearmen Elizabeth and I spent the past hour putting together.  She can't wait until we are finished assembling my Greenskin army and paint it.  She'll then claim it as here own and slaughter my smallish clan of dwarfs.
Posted by aka John at 1/27/2011 09:17:00 PM 1 comment: 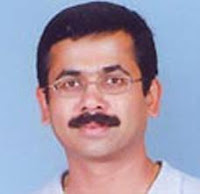 Notes
Born on Rao [Industrial/Vacuum], a smallish moon in the Q'uanir system, Dinesh chose to see the known galaxy and joined the Q'uani Merchant Marines, as an Fleet Hand Apprentice, shortly after turning 18 years old.  Dinesh proved himself both capable [promoted to 4th Officer] and loyal [declined a chance to enter Q'uanir Navy as a Petty Officer] during his first term.

Dinesh re-upped with the Merchant Marines as a Bridge Hand, manning ship sensors.  During his second term he became involved with Ava Jensi, a young navigator.

Despite frustrations with his career seeming to come to a screeching halt, Dinesh signed on the the Q'uani Merchant Marines for another term as a Bridge Hand, maintaining his duties with ship sensors, but also becoming involved with the administration of the ship.  During this term, Dinesh befriended Jacob Grude, a broker working for Ling Standard on Gram.  Jacob convinced Dinesh that it was time to move on and become involved in the lucrative specialty trade market.

Deciding not to re-enlist, Dinesh collected his profit-sharing from the Merchant Marines collecting a sizable amount of credits and a desirable TAS Membership good for life.