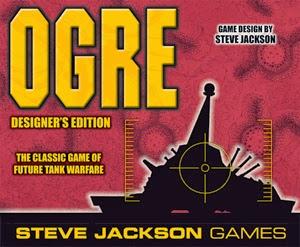 Well not here, but it will be tomorrow night (the wife is nice enough to pick it up while running errands).  I was very excited when I heard about the kickstarter back in the winter of 2011/2012.  I'm not a kickstarter supporter and decided to wait it out.  I'm kind of glad I did, as it took almost 18 months from when it funded to when it shipped.

I don't think I've ever seen a copy of Ogre outside of game magazines and I've been jonesing to try it forever.  If I'm not too excited I might remember to take some pictures and have my first unboxing post.

With a little help from the kind folks over at Simtropolis, it only took about 6 hours for me to figure out how to make this work and look good as well.  The above picture is zoomed out a little to see the highway bridge that I was trying to link to.  I probably used too many trees, but it reminds me of sections of the parkway between Baltimore and DC.


Got a new copy of Simcity 4 during the holidays and a new computer shortly afterwards, so things like this have been eating up my time.  Still gaming; started a new 4E campaign in February.  Posting this here so I can post the picture on the Simtropolis forum for assistance with making a better T intersection.
Posted by aka John at 4/13/2013 09:46:00 AM No comments:

I was playing around with soloing a few merchants, having made characters, buying a ship and looking at speculative trade.  I didn't have a subsector yet, so I was going through some of the OTU ones looking for a decent frontier area to use.  Looking at the Reft sector maps, I realized that my Jump 1 Free Trader, which cost the crew 135KCr/month couldn't go anywhere.

So I pulled out my handy dandy MgT Traveller rule book and started looking at the alternative rules for Warp Drives again.  The nice thing about the Warp Drive is that there isn't a need for a massive amount of power (ie fuel) to make your jump.  The jump rating, or in this case warp rating, is the distance in parsecs that the ship can travel in one week.  The downside?  The power plant's fuel consumption is doubled.

Not wanting to lose too much from the setting by having ships able to move 1 parsec/day, I came up with this handy chart.  Any warp above 5 is purely hypothetical.


The x-axis is distance (parsecs) and the y-axis is speed (warp factor) with the cross-referenced result equal to time in standard days.  So for example, a ship with a W2 drive could travel 2 parsecs in 10 standard days or 1 parsec in 9 standard days.  If you engage you warp drive and travel less than the maximum allowed, you still would proceed to use the fuel required.

I believe this won't wreck some of the base assumptions used in most Traveller universes, because it will still take 6 days for the fastest ship to travel 1 parsec.  For MTU I will use a 10 day week, with 3 weeks per month, with 12 months per year, totaling 360 days or 36 weeks per standard year.

I had my first 40k battle today and did very well for myself, I can say.

I played an Imperial Guard unit and my opponent had a Space Marines unit, both at 1,250 points.  This battle was to help familiarize me to the rules so I can be prepared for an upcoming tournament that one of my friends is hosting.  Saying that he wanted to get 16 players, I offered to play if someone had an army to loan me and didn't mind a total n00b as a teammate (8 teams of 2).

My unit consisted of:


I won the dice roll and decided to place first, placing one Exterminator on each flank on the high ground.  Col Straken and the Special Weapons squad starting on the left flank in a copse of trees under the Exterminator's watchful gaze.  The rest of the infantry platoon started in the center in a fortified position.  The Ogryns and the veterans starting on the right flank with the other Exterminator providing overwatch.

My opponent started both of his APCs full of Space Marines on his right and the remainder of his forces occupied ruins and fortifications in the center, with his VTOL held in reserve.

With my opponent unable to seize the intitative in the first turn, my forces proceeded to move offensively.  I hadn't really planned it that way, but some idle chatter about how both of our forces were more defensive led  me to take a chance.  Advancing through the woods, Col. Straken and the Special squad made ready to lay defensive fire on any Space Marines that unloaded from their APCs.  The infantry platoon stay in their position in the center and Ogryns and veterans moved forward to attempt to take the ruins on my right in the center of the board.  Both Exterminators held their position.

The Exterminator on the left start the shooting phase with shots on the first APC.  Both plasma cannons scattered with no affect, but the autocannon scored a penetrating hit and the APC exploded, killing a number of the squad it carried.  The special weapons squad proceeded to pour fire onto the exposed squad and between the pinning and panic fled the field.  The first round's success emboldened me even more and both of my flanks proceeded to charge straight ahead.

The next round saw another APC explode and my veteran squad, in the open, wiped out.  My Ogryns continued to make their way to the ruins and the special squad continue to pour fire into the hapless marines. However, the plasma gun which was quite effective, was also unstable, with two exploding and killing their handlers.

Turn three saw both flanks advancing.  By turn four, my Ogryns were assaulting the fortified position in the center and Col. Straken's command squad was assaulting the remaining marine passengers which tried to take cover in an cluster of buildings.  Turn four also saw the VTOL finally arrive and then proceed to take out the Exterminator on the right flank.  The VTOL proceeded to put a whipping on me the final two turns.

We decided to call the 6th turn the final turn.  With both of my Exterminators knocked out, the VTOL proceeded to take down Col. Straken, the only remaining member of the Command Squad.  There was only one special squad member left, the rest dead to self-inflicted wounds.  Half of the remaining infantry platoon was dead.  However, my opponent was in worse shape with only one marine left with the CO locked in an assault against three Ogryns and of course the accursed VTOL.

I'm not sure if I'll get another chance to play before the tourney, but I'm pretty confident I should be able to hold my own without any additional practice.